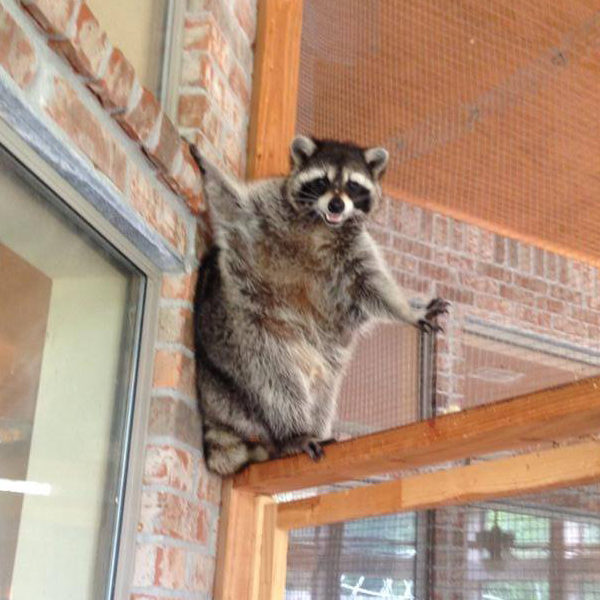 Raccoons love the water. They have a propensity for putting everything in it. From squeaky toys to remote controls for the television, Rodney was born to dunk. His love for water, however, does not extend to bath time.

Do raccoons need baths? If they want to live under my roof, they do. Rodney doesn’t smell, but when his three Chihuahua siblings are due for a bath, his royal fuzziness is, too. Bathing a twenty-five-pound raccoon can be tricky, especially if he doesn’t want to participate, which is all the time. This is why all baths begin with vodka. For me, not Rodney. Trust me; I’ll need it.

First, there is the chase. As soon as the hint of running water fills the air, he flees to the highest point he can find—the top of my eleven-foot bookcases. This mimics what raccoons do in the wild when climbing trees. Coaxing him down involves food, squeaky toys, and usually, promises of making his favorite food—Rice Krispy Treats. Once down, the wiggling commences. He’s an excellent wigglier, and when he gets his multitude of fat rolls into his wiggles, it’s like holding on to a vibrating lump of Jell-O.

With my wrangled raccoon firmly in my grasp, I proceed to the never-used-by-humans Jacuzzi tub in my master bathroom. The bath begins with dunking Rodney’s butt since that is the dirtiest part of him. After his lower portion is wet, soap is applied. I use baby shampoo because once he settles down in his bath, he inevitably splashes the water everywhere. No more tears become beneficial to raccoon and mommy since most of the water ends up on me as well.
Splashing can go on for five minutes or used as a distraction for the great escape. A fat, wet raccoon does not easily climb out of a high bathtub. He tries, his efforts often resemble a hippo sloshy around in the mud. Unlike hippos, Rodney is not agile in the water. He’s also not very agile on the land, running into everything like a bulldozer. However, he’s an excellent climber, which means you have to be careful how far over you lean into the bathtub. He will take advantage of the situation and climb on you to get out.

Once slathered in baby shampoo, rinsed, and resembling a round, dark blob with whiskers, I am ready for the toweling stage. The tub’s drained, and I climb into the tub and wrap towels around Rodney, dry him vigorously—he loves this part—and then lift him from the tub. I’ve learned through trial and error I can’t lift him out while still wet. The wiggling always gets the better of me and then I have a wet raccoon running all over my home. And raccoon fur is not only thick, but it also retains A LOT of water. Once, he got out and spread his baby shampooed wetness all over my home. It takes a very long time to get that baby smell out of upholstery, rugs, and the dishwasher—another favorite hiding place.

When I’m done, I have a semi-clean raccoon. Rodney is never truly clean. He’s more like a work in progress because he always finds something else to get into. Like the time he used peanut butter as sculpting gel on his sister—a long-haired Chihuahua, or when he stole a bottle of chocolate syrup from the pantry and decorated my kitchen floor with Picasso recreations. Yes, there are days when bath time happens more than once, and I end up running to Walmart run for more baby shampoo and vodka.

On some days, he takes his damp self to the kitchen and sits on the floor waiting patiently for his treat. And by patiently, I mean about three seconds before he’s chortling for his reward—Rice Krispy Treats.

And while I melt the marshmallows—the treats have to be homemade—and drink more vodka, I debate whether I have the strength to continue with more bath days. Then I look in his lovely brown eyes and know all the trouble is worth it. He may get smelly, and bath time may be a Herculean effort, but I rest easy because I know Walmart never runs out of vodka.