I am often asked why I write paranormal books with my blend of New Orleans voodoo, ghosts, and all things creepy. I have to blame my love of the otherworldly on my upbringing in New Orleans. I was raised in a French Quarter cottage where ghosts were very much a way of life. We would often commiserate with neighbors as to the lengths the ghosts had gone to keep their human roommates awake. Banging on walls, flashes out of the corner of the eye, even strange voices calling your name in the wee hours of the morning while you stumbled to the bathroom were common. Lights would flicker on and off, and the ghosts had a particular fondness for switching playing with televisions. As a kid, I took it in stride. Never raised to fear what I could not see, I thought ghosts the norm. After all, everyone in New Orleans has them, and it is that fascination with the unusual that resonates with the city.

It’s the reason why New Orleans is the setting for so many paranormal stories today. Walking the streets of the French Quarter, one can picture the ghosts of the past living in harmony with the residents of the present. Much like how I portray Magnus Blackwell living side by side with Lexie Arden. The two share a bond, and now where could that bond make more sense than in New Orleans.

With a history steeped in voodoo and dark tales of murder, the city caters to the creative needs of writers. Anne Rice, Tennessee Williams, and Heather Graham are just a few who have romanticized the city’s lure. However, it is also a difficult place to bring to life on the page. New Orleans has an essence, smell, and energy the natives thrive on and miss terribly when taken away. To capture that je ne sais quoi can sometimes take more than a weekend jaunt along Bourbon Street. To understand New Orleans, you must live amid its romantic balconies, Creole cottages, and devoted inhabitants. The people can give you more to write about than any brochure, or picturesque views of French Quarter rooftops. They carry the history of the city inside them. It’s part of the mystique of living there. You learn the lore from an early age. The ghosts, legends, tales of sorrow and fascination become so ingrained that you can’t pass a house in the French Quarter without remembering its story.

That’s why paranormal suits me. It is a continuation of the tales I heard growing up. Those hauntings and mystical tales have remained with me. With every book I write, I incorporate a part of the city’s lore to share with my readers. New Orleans is a place where the past is just as important as the future, and the ghosts are what we like to call Lagniappe—a little something extra. 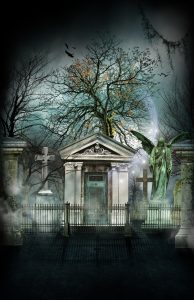