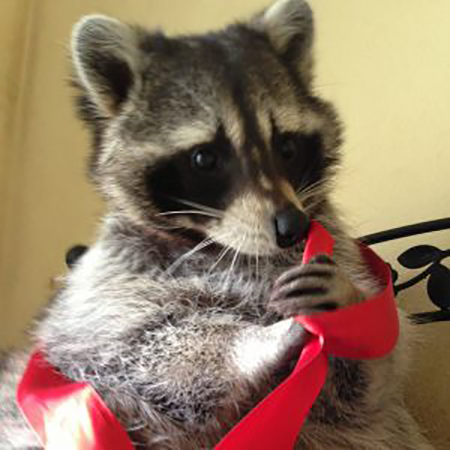 One makes accommodations when living with a raccoon, even during the holidays. The usual Christmas traditions — a live tree, lights, presents, and an open fire in the hearth — are ingredients for disaster when Rodney is around.

Raccoons are born shredders. Anything can end up ripped to pieces — plants, clothes, rugs, and drywall. But I figured during my first Christmas with Rodney a tree would be safe. I was wrong. After going to great lengths to find a natural tree, not sprayed with any pesticides, I brought home my find and left Rodney to get accustomed to it. Half an hour later, I returned with my digital camera hoping for some cute pictures only to discover my living room had turned into a scene from The Last of the Mohicans. Tree needles and strips of bark lay in assorted mounds resembling teepees while dribbles of sap crisscrossed my living room rug. Rodney and two of his Chihuahua siblings appeared decorated in sap and whatever they happened to pick up from my floor — how the torn pages from the remote control manual got glued to Rodney’s butt is a mystery. One of my Chihuahuas — the one Rodney doesn’t like — remained trapped amid a dense cluster of branches intricately piled on top of him. My husband swore the poor pooch got stuck there by accident, but since then we’ve discovered the truth — Rodney has a propensity for containing his Chihuahua siblings in boxes, cages, and even rooms in our home. Twice we’ve had to call a locksmith. I never knew a human being could laugh so loud.

If I could not celebrate my season with a tree, then perhaps lights would add some festive cheer. One day, after careful placement of lights above hip height and ORR (out of raccoon range), I returned to my living room to discover Rodney climbing a bookcase with his hands clenched around a string of lights. He was about to cast off like Tarzan. I tried everything I could to wrestle the lights from his grip — raccoons never let go of anything shiny or flashy. Instead, I unplugged the lights so he would lose interest and then coaxed him away with a Rice Krispy Treat — yes, I keep a ready supply on hand.

Despite these setbacks, I hoped my present pile would remain safe. I wrap presents for all our domestic creatures in the hopes of having a Christmas morning frenzy of squeaky toy bliss and rawhide gnawing. (When you don’t have children, you have to improvise.)

But I soon determined presents are like crack to a raccoon. Not only did he have to play with the boxes, but he kept sniffing for the tasty treats inside. Noting his intense interest, I put the presents away in a closet. But he managed to open the closet door and not only unwrapped every single gift, but stole all the squeaky toys and took them to his room for safekeeping. The Chihuahuas ganged up on him as angry siblings do, and a coup took place. They got back some of their toys, but Rodney refused to give up the big plush bear. Its death wasn’t pretty.

I have learned from my mistakes and tailored the holidays to limit any further mishaps. But to this day, baking is a challenge.

Rodney likes to lie on my kitchen floor in what I call his manta ray pose. With all four feet splayed out his belly spreads around him like the triangle of a manta ray with his ringtail jutting out from behind. I have to step over him frequently since he sticks close to my feet. When I’m baking one of his favorites, sugar cookies, his hand stays on my shoe. If I do not give him a cookie fast enough, he pats my foot until he gets what he wants. And he usually wants a lot.

Once stuffed with cookies, he retreats to his winter hammock and sleeps. This is my happy time. I’d love nothing more than to sit in front of a warm fire and relax with a drink, but such a luxury became impossible after Rodney tried to climb the chimney and got stuck in the flue. My fireplace has been deemed a portal to Hell since then and kept safely tucked away behind massive screens.

So, with my feet toasting in front of a space heater, I send my message of Christmas cheer to all of Rodney’s fans. May your holidays be blessed with love, laughter, and lots of vodka!